We received new reports from people who said they got sick with norovirus-like illness after they ate at Poke Pop in Fircrest. Since yesterday’s update, we received 9 more illness reports for a total of 26.

The illness reports fall into 2 categories:

The exposure dates range from Oct. 30-Nov. 4 for everyone who got sick. People got ill about a day and a half after exposure. Their illness lasted about 2 days.

Reports of illness have decreased so this will be our last regular update on the suspected norovirus outbreak. Read our previous posts below and go to www.tpchd.org/norovirus to learn more.

We cleared Poke Pop to reopen late this morning. Employees met the required preopening steps to clean and sanitize the restaurant. We inspected the food establishment to ensure conditions did not pose risks to public health. On Nov. 5, we closed Poke Pop because of a suspected norovirus outbreak. Since then, we received 11 new illness reports for a total of 17.

Of the 11 new reported illnesses:

For all 17 ill people, the exposure dates range from Oct. 30-Nov. 4. People got sick about a day and a half after exposure. Their illness lasted about 2 days.

If you ate at Poke Pop and became ill, we want to hear from you. Contact the Health Department at food@tpchd.org, report online, or call (253) 798-4712. Find 2-year inspection reports for food establishments in Pierce County at www.tpchd.org/foodinspections. Read our previous post below to learn more.

Our Food & Community Safety staff are working with Poke Pop, 2013 Mildred St. W., Fircrest, on a suspected norovirus outbreak. We closed the restaurant late Tuesday morning (Nov. 5) for at least 24 hours. Employees will clean and sanitize the food establishment to ensure the public is no longer at risk.

The meal they ate at Poke Pop is the only one the 6 customers have in common during the period they got sick.

In addition to cleaning and sanitizing the restaurant, staff will throw out all ready-to-eat food ingredients like produce, bread, and cheese. We are interviewing employees to determine who worked the day the customers visited and if any employees worked while ill. We will inspect the restaurant Nov. 6 to ensure it is safe for the public before it reopens.

If you ate at Poke Pop and became ill, we want to hear from you. Contact the Health Department at food@tpchd.org, report online, or call (253) 798-4712. Find 2-year inspection reports for food establishments in Pierce County at www.tpchd.org/foodinspections.

Norovirus is highly contagious and always around us. It can cause diarrhea and vomiting, often at the same time. Symptoms typically last a day or 2. It’s the same virus often related to cruise ship illness. Learn more at www.tpchd.org/norovirus. 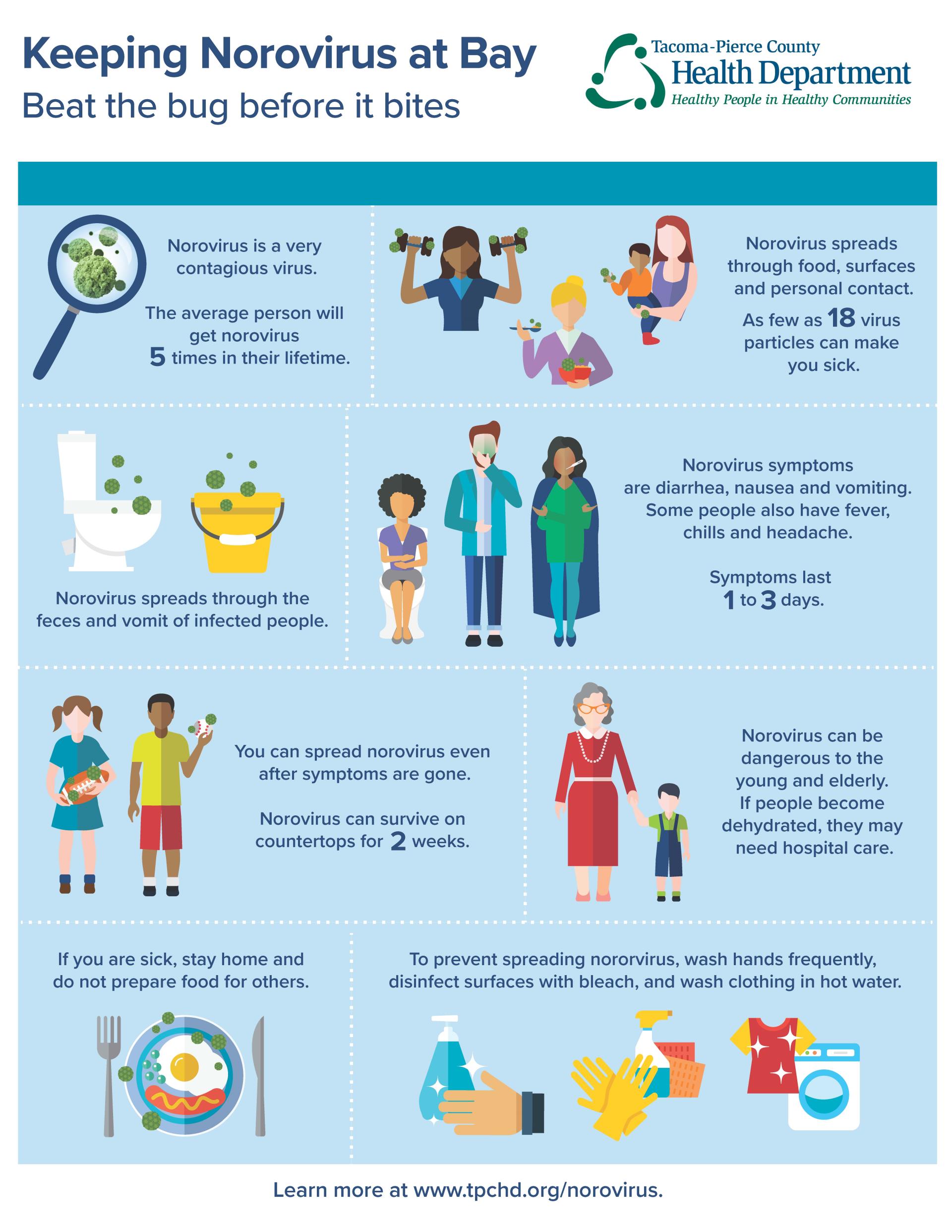 We need to keep norovirus out of food establishments to prevent outbreaks. Fresh, ready-to-eat foods that requires lots of hands-on preparation—sandwiches, salads, fruit cups—have a higher chance of involvement in a norovirus outbreak. To protect customers from norovirus and other foodborne illness:

The state’s Paid Sick Leave Law means food workers don’t have to face financial hardship when they take time off from work to care of their health. Learn more at www.tpchd.org/paidsickleave.

How to clean for norovirus.