Just in time to ruin your summer vacation to Bar Harbor and other locations on the beautiful Maine coast comes this warning from our friends at the U.S. Food & Drug Administration (FDA): 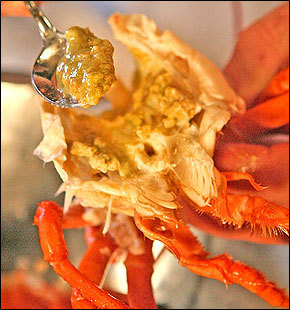 Avoid eating tomalley in American Lobster (Maine Lobster), regardless of where the lobster was harvested, because of potential contamination with dangerous levels of the toxins that cause Paralytic Shellfish Poisoning (PSP).

American lobster, also known as Maine lobster, are harvested from the waters of the Atlantic Ocean from Northeastern Canada to South Carolina, inclusive.

The FDA advisory applies only to tomalley, the soft, green substance found in the body cavity of the lobster that functions as the liver and pancreas. Cooking does not eliminate the PSP toxins. However, studies have shown that, even when high levels of PSP toxins are present in lobster tomalley, lobster meat itself is typically unaffected.

Symptoms of PSP include tingling and/or numbness of the mouth, face or neck; muscle weakness; headache; and nausea. In extreme cases, when large amounts of the toxin are consumed, these symptoms can lead to respiratory failure and death. Symptoms usually occur within two hours of exposure to the toxin. Anyone experiencing these symptoms should seek medical attention.

For more, go to the FDA here.