In January 1993, the Washington State Department of Health launched an investigation into an uncommonly high incidence of hemolytic uremic syndrome (HUS) among Seattle-area children. It traced the source of their illnesses back to E. coli O157:H7 bacteria that had contaminated hamburger patties sold at area Jack in the Box restaurants. In the following weeks, Idaho, California and Nevada reported numerous cases of E. coli infection among residents that had eaten at Jack in the Box restaurants. The scope of the outbreak widened.

Ultimately, 73 different Jack in the Box locations were linked to the E. coli outbreak. The bacteria sickened over 700 people in four states (602 of them from Washington) and led to 171 hospitalizations and 4 deaths. The investigation into the outbreak eventually identified five slaughterhouses in the United States and one in Canada as possible sources of the bacteria, but the exact source of the contaminated meat, produced by the Von Corporation of California, was never pinpointed. Further investigation revealed that Foodmaker, Inc., parent company of Jack in the Box, had been warned by local health departments and its own employees that its hamburgers were being undercooked, but had decided that cooking them to the required 155 degrees made them too tough.

Brianne Kiner, nine years old at the time, suffered one of the worst of the illnesses resulting from this culinary choice.  Brianne was admitted to Seattle’s Children’s hospital days after eating a hamburger from a Redmond, WA Jack in the Box.  She developed HUS, which caused her to become puffy and jaundiced.  She began to bleed from every orifice in her body and required months if dialysis.

Brianne would eventually slip into a coma, during which doctors removed her large intestine and hooked her heart, lungs, and kidneys up to machines to keep them functioning. Though expected to die, Brianne eventually emerged from the coma, and began the slow process of recovery, to the extent she would be able to recover. Many effects of her infection were permanent, including diabetes, asthma, brain damage and future kidney problems that will eventually lead to the need for a transplant.

William Marler represented Brianne in a claim against Jack in the Box and Foodmaker, and obtained a $15.6 million settlement on her behalf, in addition to successfully resolving cases on behalf of dozens of other victims of the outbreak. An accomplished attorney and national expert in food safety, William (Bill) Marler has become the most prominent foodborne illness lawyer in America and a major force in food policy in the U.S. and around the world.  Marler Clark, The Food Safety Law Firm, has represented thousands of individuals in claims against food companies whose contaminated products have caused life altering injury and even death.

Bill began litigating foodborne illness cases in 1993, when he represented Brianne Kiner, the most seriously injured survivor of the historic Jack in the Box E. coli O157:H7 outbreak, in her landmark $15.6 million settlement with the company.  The 2011 book, Poisoned: The True Story of the Deadly E. coli Outbreak that Changed the Way Americans Eat, by best-selling author Jeff Benedict, chronicles the Jack in the Box outbreak and the rise of Bill Marler as a food safety attorney. 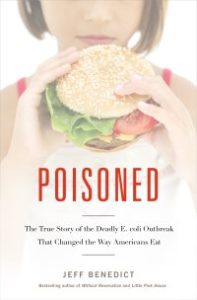 For the last 20 years, Bill has represented victims of nearly every large foodborne illness outbreak in the United States, filing lawsuits against such companies as Cargill, Chili’s, Chi-Chi’s, Chipotle, ConAgra, Dole, Excel, Golden Corral, KFC, McDonald’s, Odwalla, Peanut Corporation of America, Sheetz, Sizzler, Supervalu, Taco Bell and Wendy’s. Through his work, he has secured over $600,000,000 for victims of E. coli, Salmonella, Listeria, Botulism and other foodborne illnesses. He is a frequent writer on topics related to foodborne illness.  Bill’s articles include “Separating the Chaff from the Wheat: How to Determine the Strength of a Foodborne Illness Claim”, “Food Claims and Litigation”, “How to Keep Your Focus on Food Safety”, and “How to Document a Food Poisoning Case” (co-authored with David Babcock). He is the publisher of the online news site, Food Safety News and his award-winning blog, www.marlerblog.com is avidly read by the food safety and legal communities. He is a frequent media guest on food safety issues and has been profiled in numerous publications, including the ABC News, New York Times, The New Yorker, and The Wall Street Journal.

In 2010 Bill was awarded the NSF Food Safety Leadership Award for Education and in 2008 earned the Outstanding Lawyer Award by the King County Bar Association.  He also received the Public Justice Award from the Washington State Trial Lawyers Association.

2016 – This genius lawyer is our best hope against deadly food poisoningMother Jones, Kiera Butler, May 20