Today the CDC increased its total to 362 individuals infected with the outbreak strains of Salmonella Heidelberg reported from 21 states and Puerto Rico. The number of ill persons identified in each state is as follows: 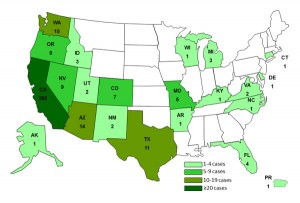 Epidemiologic, laboratory, and traceback investigations conducted by local, state, and federal officials indicate that consumption of Foster Farms brand chicken is the likely source of this outbreak of Salmonella Heidelberg infections.  Illnesses have occurred from February 2013 through at least October 2013. A similar Salmonella Heidelberg outbreak linked to Foster Farms brand chicken occurred from May 2012 to April 2013 sickening 134 according to the CDC.