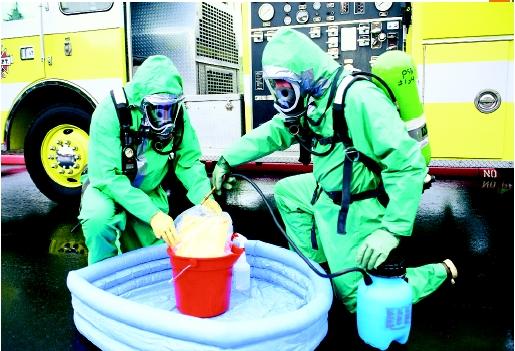 Anyone stuck with cans of  "GFS Fancy Blue Lake Cut Green Beans" from the New Era Canning Company in New Era, Michigan better be careful.   They may carry deadly Botulism inside.

So the U.S. Food & Drug Administration is recalling them and telling consumer to throw them away—very carefully.  The FDA says:

"Customers who have the affected cans of cut green beans or who have used the green beans in recipes should throw cans and food away immediately. Any food that may be contaminated should be disposed of carefully. Even tiny amounts of the C. botulinum toxin ingested, inhaled, or absorbed through the eye or a break in the skin can cause serious illness. Skin contact should be avoided as much as possible, and the hands should be washed immediately after handling the food. "

Or maybe you should just dial 911 and ask for immediate service from a Hazardous Waste Disposal team. (Come to think of it, some local ordinances and state laws may require as much.  Better check with an attorney!)

The details from the FDA include this:

C. botulinum is the bacterium that causes botulism. The bacterium produces a toxin that can result in a life-threatening illness or death. To date, no illnesses have been reported in connection with the recall.  For everything else the FDA has to say, go here.